Our Blog
You are here: Home1 / Our Blog2 / Air-conditioning in Halifax3 / 1234Yf Car Air conditioning gas is here at Pellon Autocentre. 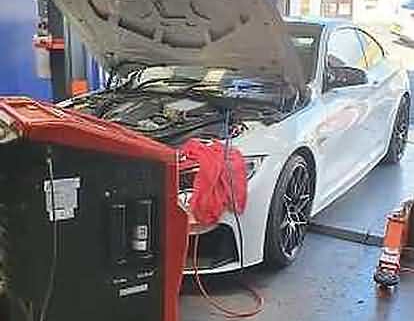 So, although we are now out of the European Union then there are certain things that we are still aligned to! Of course one of the continued alignments is for vehicles. This includes a new directive that came into force this January. Consequently referring to a new type of air conditioning gas. So the new gas is known as 1234YF. This new gas will eventually replace the other older gases thus used in car air conditioning units. So, the old gas was redeemed as “not environmentally friendly” and had to be replaced.

Subsequently, the reason is that the old style gas that we used was damaging the environment when it leaked out from the vehicles. Known as “R134” refrigerant the old gas was considered as a damager to “global warming” and had to be replaced.

In fact the R134 gas was considered to have a much worse effect on the environment than the dreaded “carbon dioxide”.

New gas has a higher cost

Of course like all new product developments then this new gas comes at a higher price to motorists. So, this new gas is a result of years of development and industry research. Initially, the gas has been developed by two manufacturers and so the end costs to the consumer are considerably higher. So the new gas the 1234YF is more expensive than its old counterpart the R134 gas.

Importantly though this cost should level out as other manufacturers kame the price more competitive and more vehicles are using the new gas.

Can my garage supply the new gas!

Of course, the answer is yes your local garage or autocentre will have access to the new  gas. So, here at Pellon Autocentre we have invested in a new air conditioning gassing machine specifically for re-gassing cars with the new 1234YF gas installed. So, if you know that your car is charged with the new gas it may be prudent to check with your garage and make sure they are equipped to do the work! Apparently, not all garages have made the investment required.

This could also include the main dealership garages, so its well worth a check before you have a wasted journey. Finally our image shows a new BMW with air conditioning issues using the new 1234YF air conditioning gas. 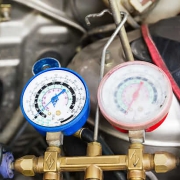