Our Blog
You are here: Home1 / Our Blog2 / All Tyre Articles3 / Michelins New Uptis-On the Move 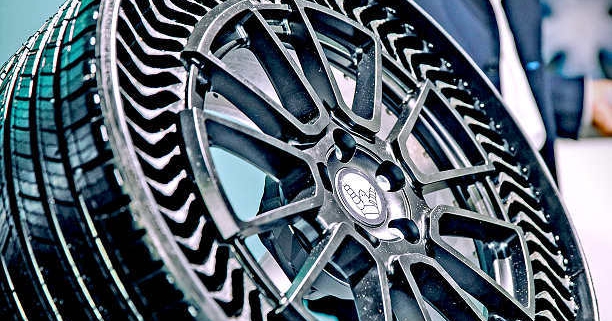 I am not really surprised at this particular development coming out of the Michelin Tyres stable! Since the first tyres were produced back in the 1800’s.So the large tyre companies have been in the race to try and beat the rest. Both in tyre development and tyre safety issues. Nothing in the tyre industry really stays still.
Over the years the general principle of tyre has remained and is based around “air”. So, Pneumatic tyres are filled with air. Keeping this air in a tyre at the correct pressure has always been the challenge.
Unfortunately for me then I am old enough to have worked in the tyre industry when most tyres were fitted with an inner tube. However it was about fifty years ago most tyre manufacturers were making radial tyres which were also tubeless tyres. Hence, as a young tyre fitter at the time things became much easier. As inner tubes became less used and not as important.

The tubeless tyre was not only easier to fit but could still hold some pressure when a puncture occurred. Hence very often the nail or other objects would seal the tyre a little. So, helping the motorists to get home and then change the wheel. Having the tyre repaired at their convenience. Tubed tyres would deflate immediately leaving the driver stranded. Tubeless was to be the standard for many years. However with the increasing amount of traffic then a new safety tyre would be on the cards!
Runflat tyres were to be introduced as a new safety measure. So, these tyres were developed so as not to deflate when punctured! Especially at high speed. These tyres enabled the driver to limp home at 50mph without having to change the wheel. Importantly the vehicle also remained in a straight line without swerving and possible causing an accident. These tyre and wheel units only come out on certain vehicle brands. Other companies designed different tyre safety features with the same outcome in mind. So, to prevent accidents caused by a flat deflated tyre at speed.
The answer was to be a tyre without having any air to worry about.

Michelin Involved in most technology Advances

I am a great admirer and fan of the Michelin tyre products. Mainly because in the past they have been in the advanced stages of new tyre developments. Going way back to the invention and development of the radial tyres. This new advanced Uptis tyre will be no exception. Michelin first developed a tyre called the “Tweel“. This is an airless tyre that does not have any punctures. The tyre was to be used for certain off road uses. Such as dumper truck and other site vehicles. Down time is important and these Tweel tyres saved money by not having to stop for repairing tyres. However it was always in the corner of Michelins eye to improve the technology for road use and general motoring.
The Uptis has now been developed along with general motors on their new small EV car range as soon as 2024. The new tyres have been tested on these cars and will of course bring extra safety. No puncture repairs! The new units will be available as an extra. The tyre and wheel is in one piece so a separate tyre will not be an option.
Going forward I do think its a good idea but like the EV’s will just be part of the big mix. Better off drivers will be able to afford them just like electric cars. However I do not think they will kill everybody off but just be another option. TPMS systems now give the drivers of cars with conventional tyres fitted. So you “take your choice and pay the price” like most things in this world.

Conti Eco Contact 5-Motorists will be Saving fuel with these Continental Ty...
Scroll to top