You are here: Home1 / Our Blog2 / catalytic converters 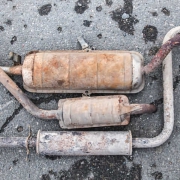 The first thing that your exhaust does is transfer the gases produced by your engine from the front of the car (the engine) to the rear of the car, expelling the gases into the atmosphere. Before the days of emission testing, the gases were a major polluter, but thanks to new car technology, cars now emit far fewer toxic gases than they used to.

They start at the front of the car with the catalytic converter, which is connected via a normal piece of pipe to one or two silencer boxes and sometimes a piece of chrome pipe to add a finishing touch as the exhaust system leaves the underneath of your car. The catalytic converter reduces the amount of CO2 gases that exit the engine by filtering them through microporous ceramic honeycomb structures, and the emissions are monitored by lambda sensors that are screwed into the converter and send messages to the on-board computer that is standard in all modern cars.

The rest of the exhaust is pretty simple in comparison to the cat. The exhaust system boxes are filled with a fibreglass-type material that quiets the sound made by the engine. In the USA, these are called “mufflers” because, simply put, they muffle or quieten the sound as it enters the box. Exhaust systems are probably one of the few things that differ in quality. A cheap exhaust system will probably only last for about 18 months, but a much better system, say one that is made by a company called “Bosal” will last up to four times, because of the superior quality of the metals used in the making of the parts.

well, starting at the front. So a big problem is the gasket that bolts your exhaust system to the engine. This gasket can become worn and deteriorate. because of the high temperature emitted by the engine. When this happens, the noise will be deafening! However, they are usually simple to repair. The next problem is just common old rust.

The complete car Exhaust system is attacked by rust. Hence, from the day that the car hits the road Also to add to this is salt. Especially in the UK, where we use a lot of it during the winter. Eventually, the rust will attack the most vulnerable parts of the exhaust, and a piece will fall off. A stainless steel exhaust system is the only cure for this problem. However, they cost two or three times the price of mild steel systems in the first place. So they are not always a viable alternative. For a free, no-obligation quote on a catalytic converter or exhaust system, check out our web site if you have catalytic converter problems.

So, here we are still in the grip of this terrible pandemic. Millions of businesses are now struggling due to Government restrictions. Especially the pubs and catering establishments. Of course, as business man then I really do feel for the people who are pulling their hair out trying to survive. Fortunately, as a garage and MOT Testing station then we are able to open.

So, earlier we did have to close for a while! Because, the government decided to suspend MOT testing for six months. Of course this killed our business over night and we kept one fitter to fit and repair tyres. Unfortunately, the rest of the garage staff had to be furloughed. Anyhow we are back to almost normal trading at the present time and are thankful for all our loyal customers.

Our customers are supporting us and we are keeping prices as low as we can to help support them in this terrible period of time. On the other side we are also trying our best to support local businesses in the Halifax area!

Sadly we are now seeing an increase in the theft of catalytic converters. Especially here in the Halifax area. This week October 2020 we have had two Honda cars submitted with the catalytic converters cut off. These cats are manufactured using some precious metals. So, this is to filter the engines emissions to give us cleaner air.

Vehicle owners do not realise the value of  this part hanging underneath and connected to their exhaust pipe. Incredibly, then most catalytic converts contain many different types of  precious metals! Including rare and precious metals such as platinum, palladium, and rhodium. So, other valuable metals such as copper, magnesium, cerium, iron and nickel are also in the mix.

This makes these cats worth while stealing and thefts are increasing. The worst case of this has come from a tyre wholesaler in Elland. All their vans were left out over the weekend. Consequently, thieves stole the catalytic converters from all the vans! Incredible!

After looking at this problem, then I have discovered that the problem is nation wide. In fact, the police have given out some advice about preventing this from happening. The advice is given on the “West Yorkshire Police” web site.

The images are from one of the Honda Jazz cars showing where the catalytic converter was cut off.

In recent months, there has been a concerning rise in the number of thefts of catalytic converters.

Naturally, from vehicles in the United Kingdom. Catalytic converters are devices fitted to the exhaust systems of motor vehicles. Importantly, that use a chemical process to convert harmful gases into less harmful substances.

The converters contain precious metals such as platinum, palladium and rhodium. So are valuable to thieves. There are a number of ways to help prevent catalytic converter thefts. Such as fitting security devices to vehicles or parking in well-lit, busy areas.

Auto thefts in the U.K. have been on the rise in recent years.

Unfortunately, with one of the most common items targeted being catalytic converters. These devices, located between the engine and the exhaust pipe, are made of precious metals. Like platinum, palladium, and rhodium, and can be sold for scrap metal value.  In order to prevent your catalytic converter from being stolen.

Nationally, Officers of the Metropolitan Police Service recommends engraving your car’s registration number on the device. Alternatively, having it marked with a forensic coding system. CCTV cameras can also be effective in discouraging thieves