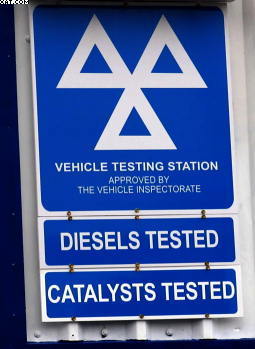 DVSA have agreed with Ministers to make the information publicly available following the announcement by Justine Greening MP in 2012, of the Governments’ commitment to the Garage Customer Experience.

So, as the owner of an MOT centre then I am not quit sure what this will achieve. Consequently,I know that there are thousands of normal garages. Strangely, who claim that they do MOT testing. Incredibly, but in fact do not. What they do is to take their customers car to an approved MOT  testing station. Consequently,having what we call”a trade test” carried out.

Of course, I am not saying that the car will not be tested correctly? But the test is not carried out by the garage and the car is not in their control. Subsequently, if the driver has an issue then he can not take it up directly with the testing station.

Customers should look out for the official MOT testing sign,

Concerned car owners should look out for an official MOT sign ! Usually outside the garage premises at the roadside. So looking the same as the one in my above image. Some garages have sort of look alike signs, but are not official testing stations.

I can only think that garages who have lost their  license to test cars because of a bad disciplinary record, still carry on taking cars in for testing, but have a trade test done at another official testing station, under the pretense that they still have a testing license, or simply do not remove their MOT Garages signs as if their still testing.

A list of banned testing sites will be published but i wonder who will read them?.

Hi I would like to introduce myself. Working in the Garage and tyre and Battery business now for 40 years. So. Working for a couple of national tyre companies before starting my first business. Of course, I now own a company here in the UK called Pellon Tyre and Auto-centre. Blogging about anything to do with cars and their related products. Naturally, that will help my business. We are members of Point-S and Trading Standards and are also a Unipart Car Care Centre.