You are here: Home1 / Our Blog2 / cheap goodyear tyres online

Goodyear Fuel Savers can save you money

This is a great time of my life to be involved in the motor industry. Hardly a day goes by without some sort of new invention or improvements to the products that are been developed and no more so than in the tyre industry. All these developments are in my opinion due to to improvements in computer designs helping tyre developers to create new products out of new materials to help with the relentless charge towards lowering greenhouse gasses.

These new EfficientGrip Fuel Savers were tested by Autocar Magazineusing

Significantly, using a Citroen Picasso as the test car. Including, using the Goodyear Fuel Savers Efficient Grip tyres. Consequently, the test were carried out over a long period of time. Of course, using normal driving conditions on normal roads and not on test tracks. So, to enable a true and realistic result. The Picasso was a bog standard car and came up with a saving of 2% over the total period of testing. Naturally, a significant achievement from Goodyear Fuel Savers. Reducing both fuel consumption and reducing greenhouse gasses.

Most companies in this sector are developing newer products that are more beneficial to the environment.Michelin and Continental are both producing greener products with far better rolling resistance figures, helping the vehicles go further with less resistance between the tyre and the road thus reducing fuel consumption.

Hi I would like to introduce myself. I have worked in the Garage and Battery business now for 40 years. Including selling Cheap Goodyear Tyres at competitive prices. Consequently, working for a couple of national tyre companies before starting my first business.Now owning  a company here in the UK called Pellon Tyre and Auto-centre. So, and I am a keen blogger about anything to do with cars and their related products. Of course, that will help my business grow.

The fuel-saving tyre that keeps performing for longer.

Goodyear EfficientGrip one of the best

Comparatively, this tyre is undoubtedly one of tyre companies best products. Of course, since the Aquatred tyre  took the tyre world by storm ! Including, the Goodyear NCT 5 tyres.

The tyre has come very close to winning top tyre magazines awards. Scoring, very highly on the new tyre labeling system. Significantly, this new tyre is a very good selling tyre for us at Pellon tyres here in Halifax, West Yorkshire in the UK.

Anciently, years ago now, I was fortunate to work for a Goodyear subsidiary, Tyreservices. Consequently, in the late seventies and eighties. Of course, before starting my own tyre company. The Goodyear experience, was fantastic. Because.

I was able to learn enough from Goodyear to be confident about opening my own tyre business. Significantly, and have never looked back. Of course, making Goodyear one of my favorite companies in the tyre World. They have an excellent tyre range including now the EfficientGrip tyres.

Hi I would like to introduce myself. I have worked in the Garage and tyre and Battery business now for 40 years. So, I have worked for a couple for national tyre companies in my younger days. Naturally, before starting my first business. Now own a company here in the UK called Pellon Tyre and Auto-centre. A keen blogger about anything to do with cars and their related products that will help my business. Members of Point-S and Motor-Codes and are also a Unipart Car Care Centre and of course Tyre-safe. 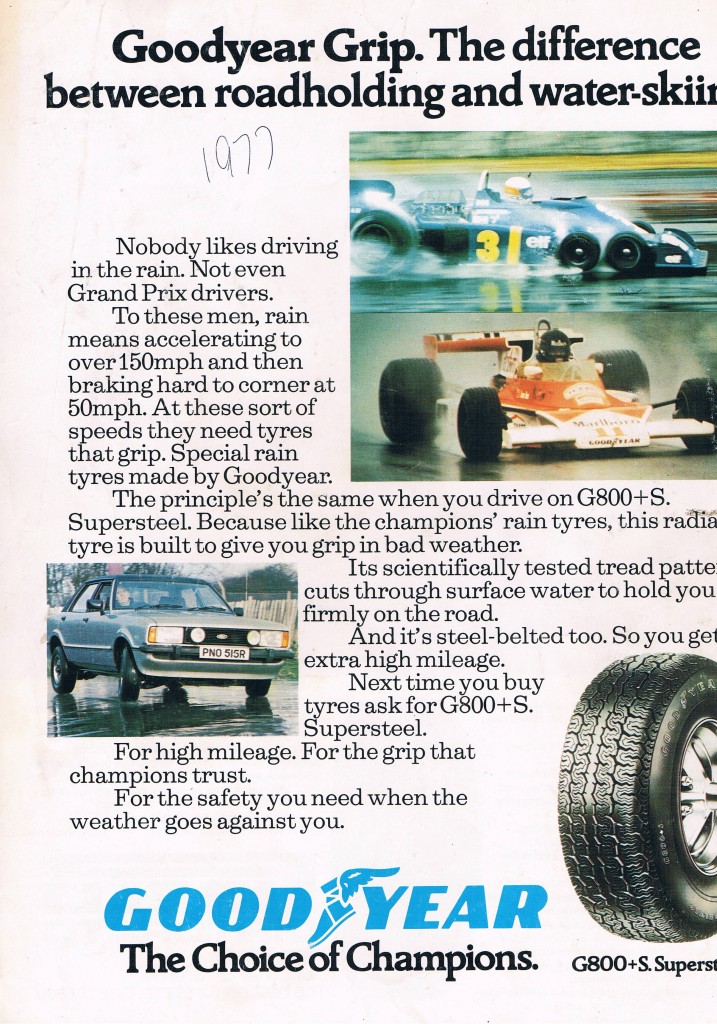 for steel belted radial tyres that give the driver a good mileage and also good grip in the wet. Goodyear did have some teething problems when the Goodyear G800+S Tyres first came out. The steel belts were not protected against oxidizing correctly with non corroding metals such as copper or brass as the Michelin tyres had perfected this procedure and were having no such problems. This was eventually corrected, I think with the help of Michelin and the Goodyear G800+S Tyres became a very popular tyre and was sold mainly through the Tyreservices outlets simply because Goodyear owned them.    This tyre was evolved with Goodyear’s Grand Prix racing tyres playing a part in the Goodyear G800+S Tyres development. This is now common place amongst today’s tyre companies with Bridgestone tyres of Japan been the latest to be involved in F! racing.

Since this post was written Goodyear and Dunlop have joined forces and become one large company. Goodyear like many of the large tyre companies are constantly coming out with new tyre products each one slightly better than the next,(so they say).

The latest tyres to come out are the Efficient grip range of summer tyres. These tyres are a range of fuel saving tyres due to modern construction and compound mixes. The Vectra 4 Seasons is their latest all-weather tyres and the winter tyre range is made up of eight different Ultragrip tread designs.

Goodyear like other leading tyre companies have also come out with a Run Flat tyre.

As one of the founder tyre companies every one of Goodyear’s tyres have  more than a hundred years of safety-driven research and development behind them. Goodyear state that they are  committed to making drivers feel good, through products that are safer, longer lasting and better for the environment.

With Goodyear G800+S Tyres, you get a great  performance and peace of mind as standard.

This Goodyear tyres post was written by Eric Roberts