You are here: Home1 / Our Blog2 / tyre safety month

The image below is of a typical part worn tyre outfit, that we can all see in our towns and cities. I cannot understand why our authorities are allowing this to happen. These people seam to have no respect for the laws regarding tyre safety and road safety. Hence, that have being campaigned for and then implemented here in the UK. Since cars were first invented.

Over the years I have been lucky enough to travel the world. As a result, I have seen some shocking things, in poor countries. Including people selling old and part worn tyres. This was very evident in Egypt . Small tyre shack (as I call them) were on nearly every street corner. So this is the comparison that I now make . These so called tyre traders are giving our country and tyre industry a bad name.

Of course, we all have the right to make a honest living . But at what cost to road safety? Also health and safety issues are at stake. In my local area we have had a few prosecutions for health and safety issues . Emanating from part worn tyre companies. My main bug is the way that these people stack up their old tyres outside the premises? the same as in the image. Thus, I can remember not too long ago when tyre dealers were chased after and indeed prosecuted for this very reason.

As far as I know it is illegal to store waste tyres outside the premises. Indeed we (and many other conscientious) tyre dealers have had to buy and use.a special container. Hence, to keep old tyres out of site. I know that there was once a controversy regarding exactly what a waste tyre actually was but according to the   Environment Agency this was clarified in the following document entitled:

Definition of Waste as Applied to Tyres. Put simply, a tyre is not waste if when it has been removed it is set aside to be refitted to a wheel immediately. Hence, almost all garages which remove worn tyres and collect them together, which is the industry norm, are causing all of the removed tyres to become waste, regardless of what is done with the tyres later because the “immediacy” requirement is violated.

I also know that as “generators of waste” we  have to have our waste collected by a “registered waste carrier”. Here is another helpful explanation from “Wrap”-

Collections of waste tyres from generators such as garages should be made only by organisations who are registered Waste Carriers. The registration process is simple and inexpensive, costing £136 for three years which then can be renewed for a further three years for £96. It is recommended that waste tyre managers also register as ‘brokers’ so that they can arrange for the collection and recycling of waste tyres without actually carrying out any part of the operation. There is no additional cost to register as a broker. Carriers/brokers are listed on the Environment Agency’s website Public Registers and Freedom of Information section.

I must emphasise at this stage, that i am not against people selling part worn tyres legally. There is a law governing the definition of part worn tyres. These are as follows courtesy of the NTDA web site–

Under The Motor Vehicle Tyres (Safety) Regulations 1994 (reg.7.) which are part of the Consumer Protection Act, it is an offence for anyone to sell part worn tyres that do not meet the following principal requirements:

To finalise, it makes me cringe when I see how these companies are operating. Worst of all when I see them being fitted to cars. Including taxis and taxi mini buses . Once again I have no problem with any person in the tyre industry who operates under the laws of our land . But this is becoming a disaster for tyre safety and the image built up over years of our industry.

TyreSafe continues to raise awareness of the potential dangers of buying part worn tyres and encourage drivers to consider only buying new with joint activities with Trading Standards as well as the media. This was most recently exemplified by a recent inspection carried out with Durham Trading Standards and the Sunday Mirror. The coverage was shared with the paper’s daily sister publication The Daily Mirror and can be found online.

Once again, the results showed a lack of competency among used tyre traders and a high proportion of non-

compliance with the regulations governing the sale of part worns. Six of the seven tyres were non-compliant with the only legal example being 18 years-old. 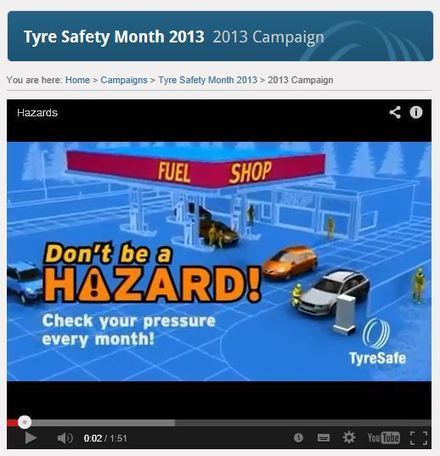 Tyre safety will go from strength to strength

I must admit I find it very refreshing to see the good work that Tyresafe.org  is contributing to road safety. I joined Tyresafe because I felt that the normal tyre depot owner had nowhere else to go to help in the quest for safer tyres and safer roads.

In the past I have joined other organisations such as the NTDA London (National Tyre Distributors Association) but found myself very disillusioned by everything else that was going on other than road safety.

When I was a member and went to a couple of meetings ,I found myself listening to people talking about golf tournaments and organising a day out at Redcar races, but not very much about tyres or tyre safety. It was not long before I resigned and left them to their own devises.

I then learned about Tyresafe.org and was impressed with their commitment to road safety and tyre things in general, like this Tyre Safety Video . So I decided to join and soon became a member. I have been impressed ever since with their drive and enthusiasm towards the tyre industry and to tyre safety, this is the type of organisation that I am pleased to be a part of.

Indeed Tyresafe are the brains behind this Tyre Safety Video

Many organisations are behind this Tyre Safety Video including the Police and Local councils. I have even seen the Motorway road signs telling drivers to have safe tyres, a great step forward in my opinion.