These tyres from out of Japan are no doubt one of the finest tyres in the World. As all major tyre companies Yokohama Japan obtain their know how and expertise from using their Yokohama Motorsport Tyres products used  in motor sport. This type of activity has always been the corner stone for the large tyre companies to prove and experiment with different types of treads and tread compounds. All the top companies use motor racing as a shop window to the World s tyre market, we all know and respect the efforts of Pirelli tyres in the last F! Series and their experiments with tread compounds on wet and dry road conditions.

Yokohama Motorsport Tyres are no different.YOKOHAMA is one of the leading Tyre manufacturers in the world and is Official Tyre supplier for: 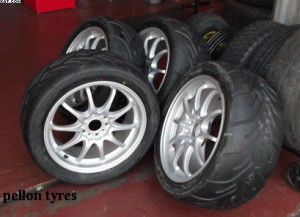 They are always looking at ways of improving their products for the safety of the man in the street with his normal every day model of car and all this is done through the participation of Yokohama Motorsport Tyres.

Yokohama Tyres UK are also well known for their use of its “environmental orange oil technology” in the production of  making them more ecological and providing an amazing fuel saving performance in its range of Blu-Earth and Motorsport . This new range is the Advan range and is one of most ECO friendly tyres out at the moment, giving the tyre much

improved cornering and handling at high speed and is also a very lightweight tyre, with very high environmental attributes.

“OE tires are also designed with a specific performance in mind. This could be high-performance handling, for example, to complement a sports car. Other vehicles might have been originally built with a focus on fuel efficiency such as in the case of hybrids. Buying OE as a replacement tire means the consumer can stay true to what the OE manufacturer had in mind when they built the vehicle.”… http://www.moderntiredealer.com/news/story/2012/11/oe-or-replacement-yokohama-breaks-it-down.aspx


This article was compiled by Eric Roberts…https://www.pellonautocentre.com/yokohama.htm

Hi I would like to introduce myself. I have worked in the Garage and tyre and Budget Car Battery business now for 40 years. I have worked for a couple for national tyre companies in my younger days, before starting my first business. I now own a company here in the UK called Pellon Tyre and Auto-centre, and I am a keen blogger about anything to do with cars and their related products that will help my business. We are members of Point-S and MotorCodes and are also a Unipart Car Care Centre and of course Tyresafe.

Whats Rubber- Without rubber latex there would be no tyres?

Peugeot 406- Brakes- Not checked for Two Years? have you checked yours recently?

Centre-Less Wheel Balancing-Can be a pain in the neck for some Peugeot owners?

Worth Fitting Winter Tyres- Which winter tyres would you choose?

Yokohama Touring Tyres- How do they develop WTCC tyres? - crash.net

Simple Car Brakes- How They Work and some of their associated problems?
Followon TwitterSubscribeto RSS Feed

Brake Pedal Creep? Is your car affected by this ? Diesel brakes only

Runflat Tyres Safer-Are now a Major Car Safety Feature-by Bridgestone Tyres
Scroll to top
We use cookies to ensure that we give you the best experience on our website. If you continue to use this site we will assume that you are happy with it.Ok