Our Blog
You are here: Home1 / Our Blog2 / All Tyre Articles3 / All Michelin Tyres4 / Michelin Tweel Tyre Development- Similar to Tyre Used on Citroën Hybrid ... 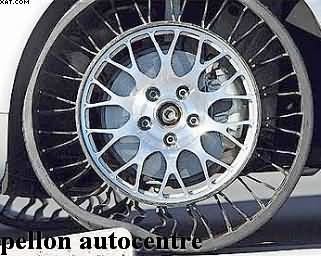 When I first saw this post i thought that the prototype Michelin tyre called the Michelin Tweel Tyre. Consequently which had been developed for real time use.  But looking at this I think not.

The new tyre is tall and narrow 165/50 x 18 will be the size used. This will make the tyre much more dynamic with far less rolling resistance. So, it will be like going back in time 50 years to Michelin’s first radials. They would have been 125 x 400 milimetric size (tall and thin). You know what they say “what comes round goes round”.

It was back in 2005 when the French tyre company first announced the arrival of the Michelin Tweel Tyre . To me it just looks like a light weight solid fork truck wheel with a wheel that has a solid rubber welded to the wheel on the outside. It could also be said to look like the old fashioned horse cart wheel, with the spokes fixed to a hub that is connected to the axle. The spokes then fit to the outer wheel, which is fitted with a rubber band.

The difference is in the materials that Michelin Tweel have used.

The same as the cart wheel. Traditionally, a solid inner hub mounts to the axle. Similar to a normal spokes alloy wheel. From this is another set of spokes that connect to the outer rim, the same as a cart wheel. These spokes are incredibly strong and are the things that replace the air pressure in a conventional tyre. The outer part of the Michelin Tweel Tyre rim is connected with a band of rubber with a tread pattern.

The second spokes that absorb all the impacts and bumps and respond to the cars steering are made from polyurethane and are incredibly strong. The French Company say that these spokes can be made of different strength and tensions, to enable the Michelin Tweel Tyre to be fitted to different vehicles of different weights and physical size, to help improve the handling, much in the same way as a conventional tyre and wheel assembly does at the moment. As I have said earlier in my article these Michelin Tweel Tyre do look like a mixture of the old cart wheels and modern alloy wheels and tyres and in my opinion area very clever concept.

Naturally, giving the car much more lateral stiffness than the conventional wheel and tyre set up. In my opinion Michelin are a massive tyre company and I cannot see them giving up their core business, to make things like this, but I do think that the Tweel may be part of a big mix of technologies in the future.

Hi I would like to introduce myself. I have worked in the Garage and Michelin Winter Tyre and Car Battery business now for 40 years. So, working for a couple of national tyre companies before starting my first business. Now owning a company here in the UK called Pellon Tyre and Auto-centre. Of course, I am a keen blogger about anything to do with cars and their related products. Of course, that will help my business to grow.

Eric Roberts has been in the Automotive and battery business now for over 40 years. Of course selling batteries for all types of vehicles. Including batteries for mobility vehicle, electric wheelchairs not forgetting the regular cars driven by disabled people. Eric has become a keen blogger over the past ten years. Importantly, whilst also running the family family garage business in Halifax UK. Eric and his wife Michelle have been blessed with a family of eight children who are all now grown up.

Best Tyres Revisited-What our Customers Ask Us When buying Tyres

Michelin Tyres Development-Set their Targets High as far back as the Thirti...

Rolls Royce MOT-Beautiful Blue Wraith in for an MOT test
Scroll to top
We use cookies to ensure that we give you the best experience on our website. If you continue to use this site we will assume that you are happy with it.Ok